I know … we don’t look a day over 45 but this year, 2014, marks the 150th anniversary of the founding of the original Ossett Observer newspaper. For 122 years Ossett had its own paper, just one source for sharing what was happening in the town; hatches, matches, despatches, promotions, lost dogs, rescued cats, stories from Ossett folks who had left to seek out lives elsewhere, match reports and community news, it was all there.

Last published on October 31st 1986, it’s not been forgotten.

We adopted the name in 2011 when we set up our arts org for Ossett and have been amazed at how many people still think Ossett Observer is a newspaper.  Folks contact us weekly to ask about rates for advertising, can we send a photographer to the school fayre? can we print a story about the (insert recent Ossett moan)? can we promote X, Y, Z and the BEST EVER REQUEST came from a funeral director touting for business who wanted to know on what day we printed our Obituary Column.

So we thought we’d take the opportunity to celebrate.

We’ve joined forces with Wakefield Lit Fest and Trinity Church to bring you a one day celebration of Ossett Observer’s 150th Birthday. 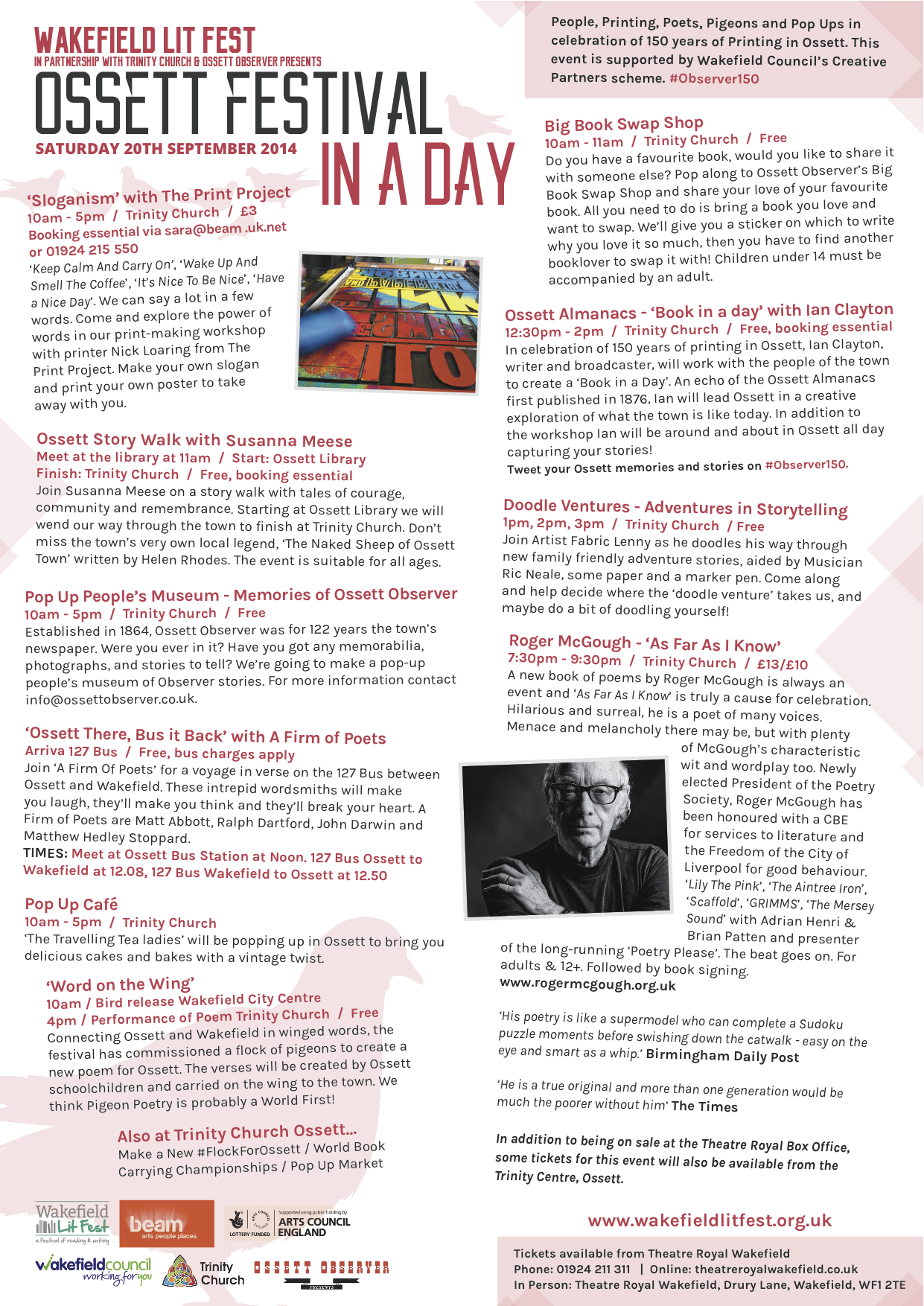 Festival In A Day is a free one day festival celebrating the stories of the people of Ossett culminating in a cracking Lit Fest Headline event featuring poet Roger McGough. There’s lots of ways you can join in.

There’s a BIG BOOK SWAP SHOP, a Pop Up People’s History Museum, an Ossett Storywalk, the opportunity to be part of ‘Book In A Day’, creative writing workshops, animated storytelling, poets popping up all over the place and the chance to print your own poster at our Sloganism workshop. We’ve got all 9 of Ossett’s Junior and Infant schools doing amazing things with words for a World First Pigeon Poetry event and more fun free activities.

We’re particularly keen to meet people that might have worked for The Ossett Observer, or who have an Observer memory or story to tell. Were you ever in the paper? Have you got any photographs that tell your story? Come and say hello on September 20th at Trinity Church. We’ll be there all day and would like to meet you.

We hope you’ll come celebrate with us.

Tweet your Observer memories and Ossett Stories on #Observer150

Prev: The Great War Inspires – Faceless Arts
Next: Book In A Day