Ossett Ukulele Philharmonia did their first festival gig of the summer  last weekend and what a wonderful day it was.

The Festival was Disability Rocks, a one day Arts and Music Festival held in the astoundingly beautiful grounds of Nell Bank at Ilkley. The Philharmonia graced the main stage at 11.30am to open the festival. We played a 40 minute set to a very happy audience and thoroughly enjoyed ourselves in the blazing June sun. They danced, we sang, it was lovely.  We had a fabulous lunch at Manjit’s travelling kitchen and soaked up a very warm atmosphere whilst waiting for the Charabanc to return to Ossett.

After our set I was interviewed by the festival film-maker, he asked me questions about whether I thought festivals and events like Disability Rocks were important. I took that to mean ‘Did I think it important that we make provision for everyone to access the festival vibe’ … well YES I really do.

I can’t tell you the importance of accessible festivals, theatre, music and dance events, and of integrated performance work. It’s something I’ve become really aware of in the past few years. Having had the privilege of working with and getting to know Dave Toole, dancer, Jo Verrent, all round fabulous person and Diversity Champion, and Mind The Gap  in Bradford, I’ve become aware of how vital it us for us, as a society, to not put physical barriers or limitations in anyone’s way. The Unlimited Festival as part of the Cultural Olympiad showed us that there actually ARE no barriers to great art or to accessing it. SO … what they can do in #thatLondon we can do up here Baht’at!

I initially wanted to write about Ossett Ukulele Philharmonia and about how fantastic they are and about our grand day out, but then I remembered something that happened to me at Latitude Festival a few years ago and decided it was way more important to talk about access and accessibility to the arts. So, 2010, Latitude. We, my partner and I queued for hours to get in, it was a bit of a trial to be honest and even though we were working there as artists for Angel Gardens, we had to wait and wait and wait. Parked next to us was a lovely fella and his missus from Lowestoft. He by some strange coincidence was originally from East Ardsley so we did a bit of ‘By ecking’ and ‘Eeee bah gumming’ and admired one another’s campervans and sat and waited for the gates to open. When they finally did. He and his missus and their van were ushered through a different gate that said above it ‘Disabled Access’ . Who knew? We all look the same sitting down. Anyway, bizarrely he ended up through a mesh fence only feet away from us so we could continue our conversations through the week. BUT. Only through the fence. We were segregated. WHY? Because the bit of the field they were in allegedly had better access to the arena than the bit we were in. It didn’t. I hated it. They hated it and it prevented us socialising. We talk about it often, about how unfair it was and just so bloody 19th Century to separate us in that way.

My point being, that access to the arts should mean just that. ACCESS. For all of us, together. And that is just what Disability Rocks achieved, my heart sang to look offstage and see Singing Hands signing our songs for folks with hearing problems, we’ve already asked them to come on stage with us next year.

We hope they’ll have us back. 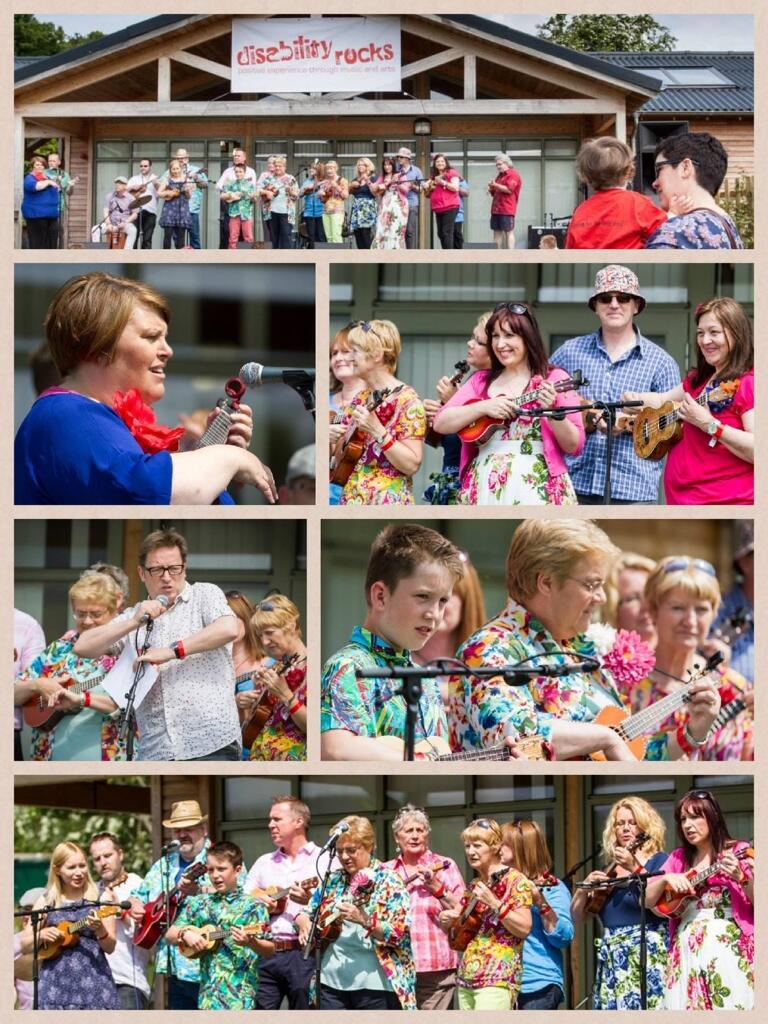 Prev: Saturday Surprise #1
Next: Why I Love My Ukulele.

It was a pleasure and a joy to have The Ossett Ukelele Philharmonia to open the festival and get the day of to such a flying start.
The smiles said it all!
Thank you x

The pleasure was ours. Same time next year? 🙂